What is Sound Healing?

Have you ever wanted to put on the most emotive songs that you can cry to when you’re feeling sad? Felt the rush of energy from a thumping workout track that raises your heart rate and motivation in one fell swoop? Or perhaps you’ve felt the instant calm from walking into a spa, the scented air complemented by a soothing, meditative audio track playing gently in the background. If so, then you’ve tapped into the healing power of music.

Studies have shown that music can have a considerable effect on our moods一and beyond the impact on our emotions, it can also have a physical effect. The right music can energize us when we feel fatigued, improve symptoms of depression or dementia, decrease stress, bring about feelings of pleasure or comfort, or help us work through some of our emotional burdens such as releasing and processing grief.

But the powerful effect of sound doesn’t have to be from what we recognize as modern-day music. Any tone with its own specific pitch or timbre ー whether it’s considered ‘musical’ or not ー can have an effect on you. Think of the beeping of a car horn, the roar of a lion, a baby’s laugh, or the sound of the wind: as you bring each of these to mind, what sounds do they make you think of一and what feelings or emotional reactions do they evoke?

Sound Healing is a practice that uses these different aspects of music as a form of therapy, by using the vibrational frequencies of various instruments to improve our mental, physical, and emotional health. While its origins have been traced back to various ancient civilizations, it is now firmly making its mark in the modern world, having even been touted as one of the fastest-growing wellness trends of the current day. Google searches for the terms “Sound Healing” and “Sound Baths” have consistently increased over the past 10 years, and in 2020, the Global Wellness Summit proclaimed sound therapy to be an “uber trend”.

With all of the benefits it can offer ー from decreased stress and better sleep, to more mindfulness, improved memory, and an overall boost in well-being ー in a relatively accessible fashion (due to the flexible nature with which it can be enjoyed), it’s little surprise that so many people are ready to embrace an aural revolution in wellness.

How does Sound Healing work?

At its core, sound healing is all about vibration一or to be more specific, vibrational frequencies. Our brain operates with brainwaves that are put under five different categories: Alpha, Beta, Delta, Gamma, and Theta. Each of these runs under a different range of frequencies一and each of those ranges allows for a different brain state, as outlined below:

When we’re busy working, exercising, or being present while interacting with others, our brains are aroused into the Beta and Gamma brainwaves. When we experience Sound Healing, our brains are taken into the Alpha and Theta brainwaves一the latter of which is the state we reach during meditation. During a sound meditation session, or a sound bath as it is also sometimes called, the practitioner or therapist will play a series of instruments chosen for their soothing tones and undulating resonations. The brainwaves of the person listening to them or “receiving” the session will naturally recalibrate to match the frequencies and pacing of the instruments, while the repetitive nature of the way they are played help to take one further into that rhythm. As the receiver enters their Theta brainwaves state, they are open to receiving the benefits of being in that state of mindfulness or meditation.

A Sound Healing therapist’s musical kit can consist of a range of instruments, usually involving sound bowls, also known as singing bowls, which produce sounds and vibrations when struck or circled with a mallet. They are usually made of metal ー some with mixed metals, of up to seven different types, including bronze, gold, copper, and silver ー or sometimes crystal, and have different tones based on their size and shape.

Regardless of whether the bowls are made of metal or crystal, both types share the common factor of being idiophonic instruments一which means that they create sound through their own vibrations. Below is a list of instruments used in Sound Healing: 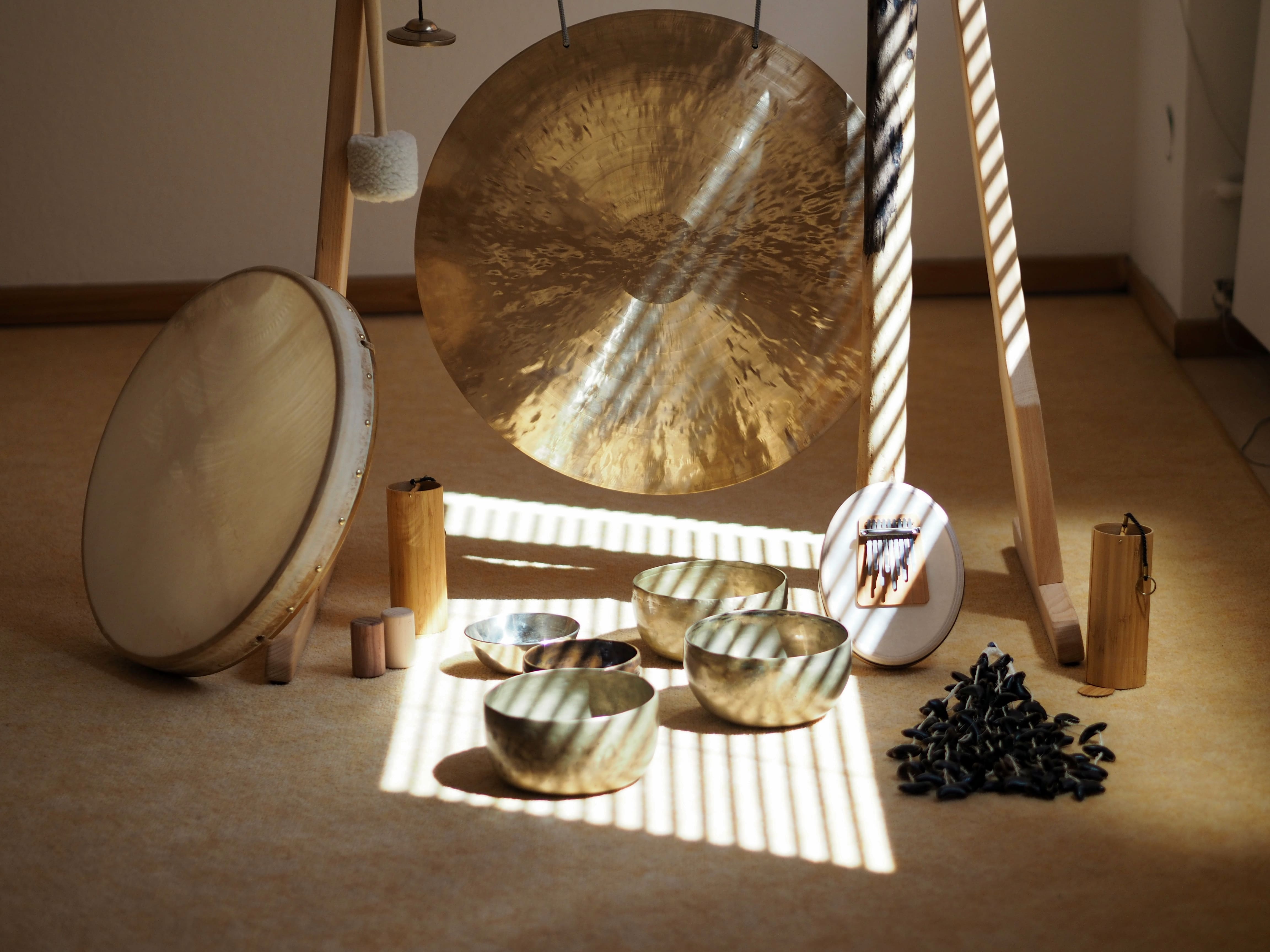 Another key tool used in Sound Healing is the human voice. Our voice can be one of our most powerful instruments, and should not be neglected or forgotten when considering Sound Healing instruments. During a session, the voice of the therapist can be a key part of what allows you to drift off into a relaxed state, while various forms of singing and chanting specifically work to help soothe the mind and body. Research into neurodynamics has shown that repetitive chanting of the word “Om” can help communicate to our brain’s limbic system that we can relax, and that it may help stimulate the vagus nerve. Choral and tonal singing ー using overtones and undertones as part of a singing technique ー are other methods that use the voice as an instrument for Sound Healing. 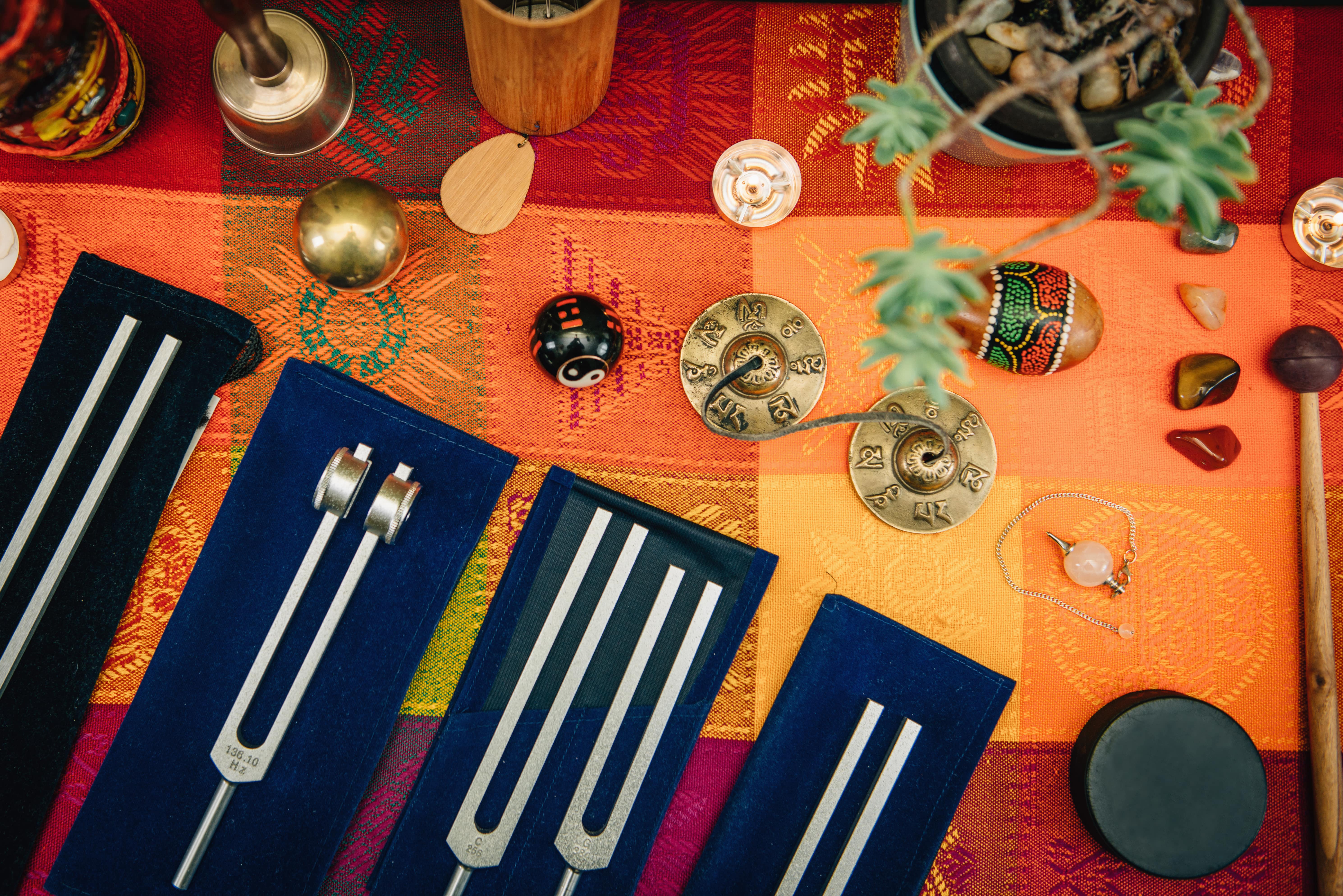 The origins of Sound Healing

Sound healing has a rich and varied history that spans across numerous cultures. The Aboriginal peoples of Australia were said to have done it more than 40,000 years ago, while in Ancient Greece, the music of lyres, flutes, and zitters, along with chanting, were used to help cure issues of mental health, digestion, and sleep. In Ancient Egypt, instruments such as the sistrum along with chanting were a staple part of many temples, used to help reach expanded states of consciousness as well as healing ills of the body and mind.

Across India, Sound Healing has historically been used in multiple ways, from sacred and ceremonial music with instruments such as the Sitar, to the singing and recitation of mantras, and numerous methods of chanting. Tribes in Africa have used drums and instruments such as the Kalimba throughout history, for ceremonial and healing purposes alike, while across East Asia, gongs have long been a principal feature in temples, meditation centers, and other integrative medicine and healing practices.

In Tibet, where metal sound bowls have been used for thousands of years, these singing bowls were used as an ancient means of achieving regeneration of the body and soul, and deep relaxation of the brain. Tibet is where these bowls are most often credited as coming from一although that fact has been up for debate, along with questions of cultural fetizisation or appropriation alike, with no-one being truly certain of who first invented them. Some accounts tell a story of how these bowls were first used for food, before people discovered that they could also produce harmonic frequencies that would allow them to be used as an instrument for the healing power of sound.

Nowadays, Sound Healing is most commonly accessed in the form of a group meditation session. The way sessions are held will change depending on the therapist or practitioner in question: each one will have their own preference of go-to instruments. Some will involve a pure sound bath, while others will incorporate various other methodologies such as Yoga, Yoga Nidra, Guided Meditation, Aromatherapy, or even Cacao Ceremonies一a shamanistic healing practice that involves the use or drinking of “Ceremonial-Grade Cacao”, or cacao made from heirloom strains that is unlike conventional cacao or cocoa powder.

However, this isn’t the only form of Sound Healing that exists. There are various other techniques growing in popularity, including Tuning Fork therapy, Om Chanting, Kirtans一the practice of chanting certain names or mantras originating from India, and Binaural Beats一a type of soundwave therapy that utilizes two tones with slightly different frequencies that are listened to at the same time, to create an auditory illusion that produces many of the same effects as meditation.

Regular music can also be used in music therapy, albeit in a less spiritual context: Numerous studies have found that different types of music can be used to elicit changes in our mental, emotional, and physical state, with one recent study even having found that people who listened to music before, during, or after surgery experienced less pain and anxiety than those who didn’t一in some cases even needing less pain medication afterwards, and experiencing an overall faster recovery. 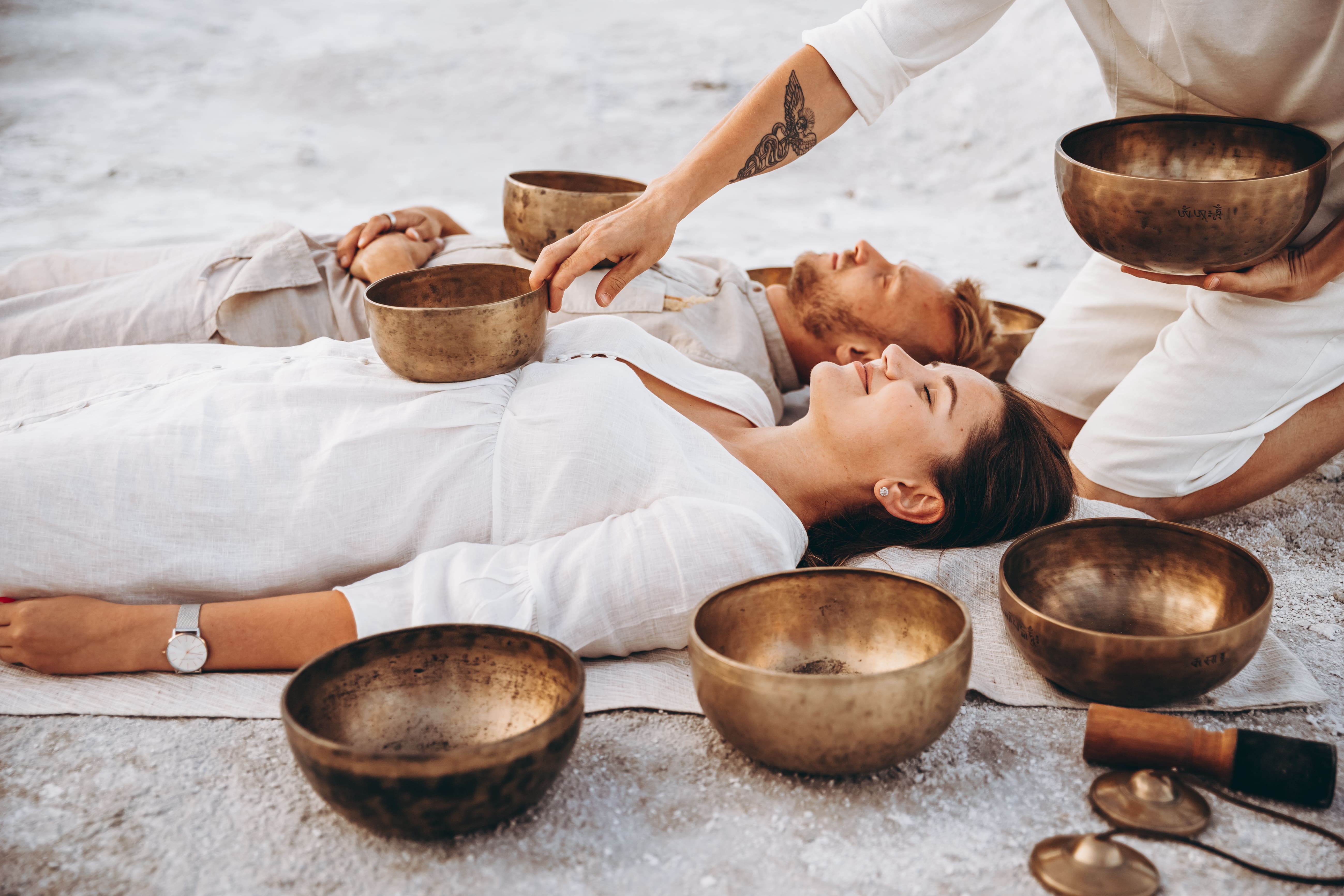 What are the benefits of Sound Healing?

Aside from helping to reduce pain and hasten recovery, music has also been found to help stimulate the brain to help us be more alert, engaged, and more productive一 which is excellent when we are studying or working. Listening to Classical music, for instance, has been found to help make listeners more intelligent, while having some good tunes on while we’re working out can help us to enjoy exercise more. And listening to sad music when you’re feeling sad has been found to help lift the spirits一many depressed people even prefer to listen to sad music when they are feeling low.

Sound Therapy can offer many of the same benefits as a meditation or mindfulness practice, such as less stress, more patience, more self-awareness, an increased ability to be in the present moment, and a greater ability to gain new perspectives even in stressful or challenging situations. In some studies, it has even been shown to help people with neurodegenerative diseases such as Alzheimer’s and Parkinson’s be more positively responsive to stimuli.

How can you use Sound Healing?

One of the best things about Sound Healing is how accessible and flexible it is. Sessions are typically found at a yoga studio or somewhere similar, and in-person options will vary from one-on-one to group sessions, pure Sound Healing or incorporated with another practice. Some therapists may offer online sessions.

Whether you’re planning to do it online or virtually, we suggest preparing anything that can help you be more comfortable, such as a pillow to rest your head on (or place under your knees), and a blanket, so you can stay warm as your body cools down while lying in stillness. It is best to remain as still as possible during a session, so it’s wise to prepare beforehand by using the restroom, avoiding drinking too many fluids (or caffeine), and finding a comfortable position. If light is causing a disturbance, a sleep or eye mask can help. If you’re doing it digitally, we recommend using earphones or headphones to ensure that the sound experience is as immersive as possible.

Regardless of which option you choose, finding a way to integrate this practice into your lifestyle so that you can do it regularly will offer you the most benefits to be gained through the healing power of sound.

All of the content on our website is thoroughly researched to ensure that the information shared is evidence-based. For more information, please visit the academic journals that influenced this article: The Psychological Functions of Music Listening; Music Use for Mood Regulation; Listening to Fast-Tempo Music Delays The Onset of Neuromuscular Fatigue; Reviewing The Effectiveness of Music Interventions in Treating Depression; Why Do We Listen To Music? A Uses And Gratifications Analysis; Memorable Experiences With Sad Music: Reasons, Reactions, and Experiences of Three Types of Experiences; Global Wellness Summit: 2020 Wellness Trends; What Is The Function Of The Various Brainwaves?, Music, Medicine, Healing, and The Genome Project; Music As An Aid For Postoperative Recovery In Adults; Your Brain On Music; Music Moves Brain To Pay Attention, Stanford Study Finds; Music Makes Us Enjoy Exercise More, FInds Brain Study; Why Do Depressed People Prefer Sad Music?; Sad As A Matter Of Choice: Emotion-Regulation Goals In Depression