What Is the Fight-or-Flight Response and Why Does It Matter?

Imagine that you're driving a car. Suddenly, something's wrong: a dog has walked out onto the road in front of you. At that moment, every other thought clears from your mind, and an intense feeling rushes through you: the impulse to swerve instantly.

This is the fight-or-flight response. It's your body's instinctive system that can help protect you from potential threats – in this case, hitting the dog. This mechanism can protect you in many ways. For instance, when you're coping with stress-provoking situations, the system will not only lower your social engagement, but also decrease your responsiveness to the outside world. All of these reactions can help you focus on coping with the danger at hand.

It’s an entirely natural response, and it isn’t just beneficial, it’s an essential part of how we deal with everyday challenges. But how exactly does it work, what causes it, and when it comes to our internal fight-or-flight mechanisms, is it possible to have too much of a good thing? Read on to learn more.

What Is the Fight-or-Flight Response?

The fight-or-flight response is a mechanism that describes how animals – including humans – react to a potential threat. A term first coined by the American physiologist and neurologist Walter Cannon in 1915, fight-or-flight is a natural physical response that can occur when we feel stressed in the face of danger – which can be either real or imagined. Through activating the functions of the sympathetic nervous system, along with stimulating the release of stress hormones, the fight-or-flight response can help prepare us to better cope with harmful stimuli. And most importantly, it can protect us from danger.

In fact, scientists view the fight-or-flight as an instinctive reaction with an evolutionary origin. They believe that it is a response or system that has long been programmed and embedded into animals’ brains to help aid survival. Due to the heavy involvement of stress hormones such as adrenaline and cortisol, fight-or-flight is also sometimes known as the “stress response”. Simply put, it is a natural, immediate, and automatic reaction that can occur when we sense potential harm.

How Does the Fight-or-Flight Response Work?

The original theory that Cannon proposed in his book: Bodily Changes in Pain, Hunger, Fear and Rage suggested that our bodies can react in two ways:

The “Flight” Mode: This can happen when we escape the threat. Leaving a room upon seeing a spider, or walking away from an argument or confrontation that makes us uncomfortable before it is concluded, for instance, are some common examples of “flight” responses. Scientists suggest that this mode is provoked by fear and anxiety, rather than rage and ferocity like the “fight” mode. 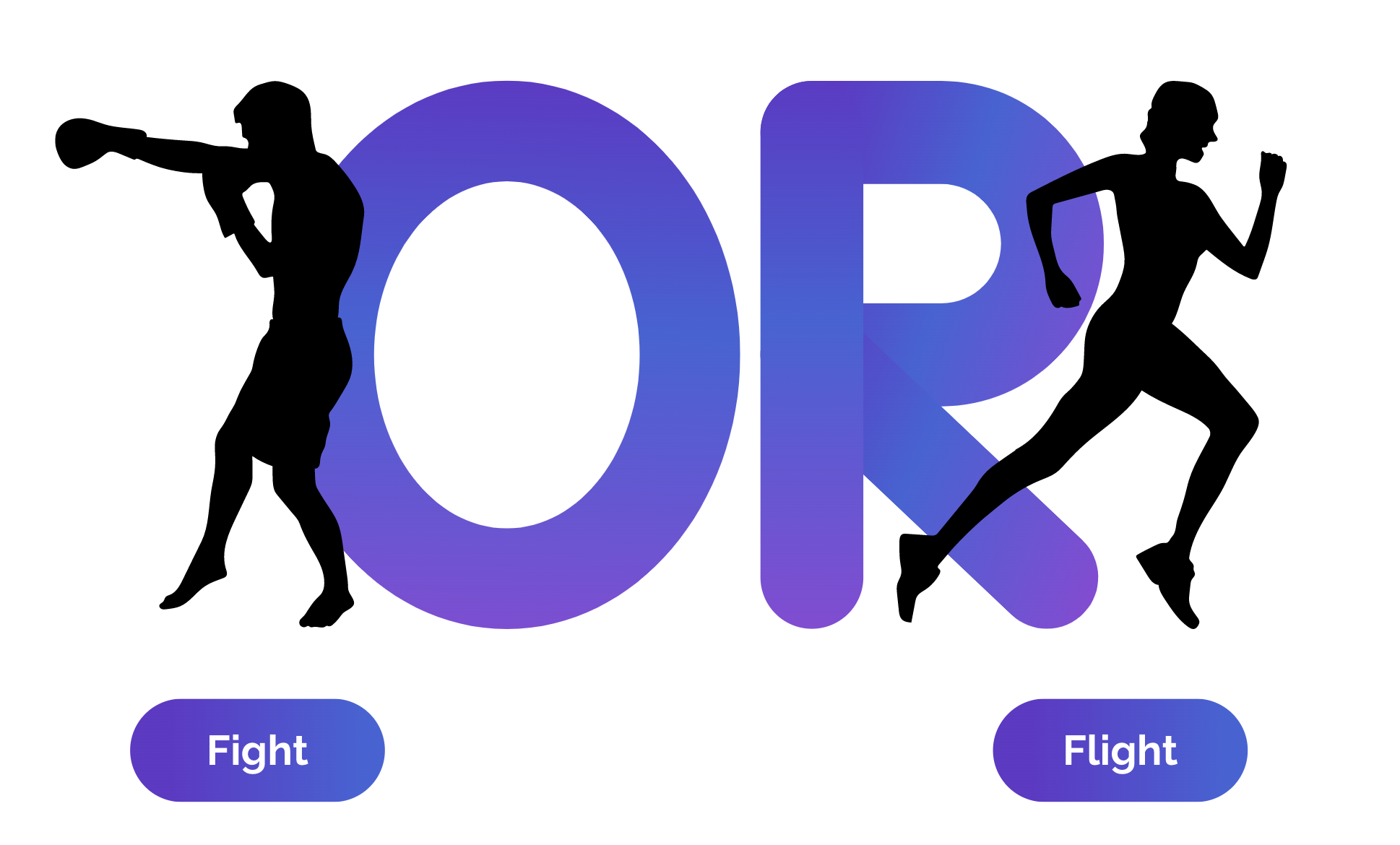 The fight-or-flight response is controlled by hormones. In particular, when we sense a potential threat, one of the areas in the brain – the hypothalamus – will activate the sympathetic nervous system. This system will then trigger a gland in the endocrine system – the pituitary gland – to signal yet another gland – the adrenal gland – to secrete the stress hormone cortisol.

Once this gland releases the stress hormone into the bloodstream, one’s physiological state will change – for example, the heart rate increases, and the breath becomes faster. These bodily changes occur because these stress hormones can signal the body to transfer more energy to certain body parts that can help us “fight” or seek “flight”, such as the leg and arm muscles. This can improve muscle strength as the heart pumps blood to those body parts. And as a result, the body will be more ready to cope with the threat.

When we experience fight-or-flight mode, we remain in this state until we can perceive that the potential threat is gone. If we don’t feel safe just yet, the body remains in a state of being ready to fight or fly – and in doing so, continues to secrete stress hormones to help us stay alert. It is only when the danger disappears that we stop releasing these hormones and return to a normal state. This state of restoration is called homeostasis in physiology – a process that portrays how we feel safe again after the threat has passed.

What Are the Functions of the Fight-or-Flight Response?

Scientists believe that, in an evolutionary sense, the fight-or-flight response is an adaptive and instinctive reaction that can help enhance survival. For instance, a deer will typically run away as soon as it detects that a lion or other predator is nearby, to avoid being killed and/or eaten.

The fight-or-flight response can also be helpful to human beings, for ensuring our survival from primal ancient times to modern-day society. Although many stress-provoking situations that we feel today may not seem as life-threatening as living in the wild, such as needing to hit a tight deadline at work, or being stuck in traffic while we’re running late, this automated response is still very much at work in keeping us alert, alive, and ready to face potential trouble. For instance, the fight-or-flight response is what helps us be wary of poisonous foods, be alerted to a fire when we smell smoke burning, run from loud and threatening sounds, be that dodging a heavy item from falling on us, or even fleeing from a gunshot. With its intuitive nature and deep programming into our brain systems, the fight-or-flight response is key to our survival, and can help us react to potential threats quickly without consuming too much of our brain energy.

How can the Fight-or-Flight Response Affect Your Health?

While the fight-or-flight response might be helpful when we’re dealing with short-lived extreme or life-threatening situations, having this mechanism activated for a prolonged period can actually damage our health – both physically and mentally.

When the fight-or-flight response is stimulated for a prolonged period, it can harm our psychological well-being. This is because when we are struggling with an imagined psychological threat, we are also provoking our bodily systems and the release of the stress hormone: cortisol. This means that even if the threat is not real, or tangible in any way, we’ll still react the same way as if we were dealing with a genuinely life-threatening situation, whether we like it or not. And this can take a huge toll on our mental and physical health.

Psychological studies have discovered that people struggling with certain mental health issues – such as post-traumatic stress disorder (PTSD) – tend to struggle with turning off their fight-or-flight response, even after the threat is long gone. Other mental health challenges such as extreme anxiety, for instance, can increase our chances of imagining some threats even when these fears are not grounded in reality, yet our reaction to these perceived threats will still be the same. Chronic stress, too, can be a cause of activating our fight-our-flight response – and keeping us locked in it. Studies have shown that remaining in this state for an overly-prolonged period can, in fact, damage the immune system. This is because when we are in fight-or-flight mode, our bodies transfer our energy from our other bodily systems – including the immune system – to our muscles, as well as the sympathetic nervous system. And this energy transfer process can, in turn, make us more vulnerable to health issues.

Fight-or-Flight: From Then to Now

Experiencing some stress in life is inevitable – and it’s not always a bad thing. Some stress can even be good for us! Either way, we cannot always anticipate when we will experience it. Yet although our ancestors relied upon this stress-induced reaction for survival in ancient times, the fight-or-flight response doesn’t necessarily serve us the same way it did in the past.

In modern times, the most common “threats” that put many of us into this instinctive bodily state are not physically harmful, nor do they seriously threaten our lives. For example, we can experience the fight-or-flight response at work, when we’re asked to present an idea in front of an intimidating crowd, or given an extreme task-load to handle in a very short span of time. We may also feel it when we’re walking down an empty street at midnight, even if we know that that particular street is safe and well-lit. We can even feel it from social pressures. And indeed, although many of these so-called threats do seem to be invisible – or indeed, even psychologically-imagined ones – if we’re still experiencing them as threats, then we will still undergo the release of our fight-or-flight instincts.

So how do we deal with it when the stress of modern-day life is causing our fight-or-flight to activate more often than we need or want it to, and it all gets a little bit too much? For starters, we can seek to understand it: getting to know our triggers, for instance, and understanding what can make us feel threatened, versus what makes us feel safe. We can ask ourselves if our source of stress (or whatever is instigating this fight-or-flight response)  is something we have imagined through mental rumination, or something real. Once we have differentiated between them and identified what it is, we can examine whether or not we can stop or remove it. We can also work on healing our nervous systems, by working to heal from our traumas and teaching ourselves how to once again feel safe in situations where our stresses, triggers, and fears are now gone – and using tools such as meditation, breathing exercises, and a healthy lifestyle to bring ourselves back to a better state of balance.

All of the content on our website is thoroughly researched to ensure that the information shared is evidence-based. For more information, please visit the academic journals and other resources that influenced this article: Walter Bradford Cannon; Fight Or Flight Response; Adrenaline Rush: Everything You Should Know; Cortisol: Why the "Stress Hormone” Is Public Enemy No. 1; Understanding the Stress Response; Bodily Changes in Pain, Hunger, Fear and Rage: An Account of Recent Researches Into the Function of Emotional Excitement; Homeostasis: The Underappreciated and Far Too Often Ignored Central Organizing Principle of Physiology; Phobias: The Psychology of Irrational Fear; The Nature of Stress; The Effects of Stress Hormones on Immune Function May be Vital for the Adaptive Reconfiguration of the Immune System During Fight-or-Flight Behavior