What Is Flow State?

What makes you happy? Is it financial wealth that can afford you a bigger home for you and your family to live in more comfortably, or the ability to purchase whatever you want without having to worry about debt? Is it a luxurious vacation in an island paradise? Perhaps it’s a new car, a high-end designer handbag, or a smartphone with cutting-edge tech. While these things may bring you happiness in the short-term, positive psychologists believe that true happiness comes from within and is not dependent on external factors or material things like money, a house, flashy cars, or the latest clothing accessories and gadgets. After all, even billionaires can be depressed. Instead, to be truly happy and live life to the fullest, positive psychology suggests that one has to achieve internal happiness.

One way to do this is to enter the flow state: a unique state of mind known to many as “being in the zone.” Have you ever gotten so wrapped up in something that it actually made you forget to eat for a moment? Perhaps it’s when you’re playing a moving piece of music on an instrument you love, when you’re painting with your favorite medium, or when you’re gardening. Maybe it’s when you go surfing, when you’re dancing to tunes with an irresistible beat, or when you head out for a run. This state of being was even depicted in the 2020 animated Pixar film Soul, where it was even called “The Zone” 一 in the film, this depicted a plane that souls enter when they are feeling so deeply involved in their passions, so intensely present in what they’re doing, that they reach an almost euphoric trance state. In real life, this zone may not play out exactly like it does in the film, but it is real: in positive psychology, it’s called the flow state.

It can happen when you’re learning something interesting, when you’re being creative, or focusing intensely on something. And being in this state on a regular basis can be an easily accessible way to generate true happiness 一 which, in turn, can help you to feel more fulfilled in life. Read on to learn more about the flow state, its benefits, how to enter it more often, and how it can help bring you long-lasting happiness.

Flow is a mental state wherein one is fully involved in an activity, in a way that is totally and utterly immersive. It is a state of hyper focus and complete engagement, and usually happens when people concentrate on an activity intensely, leaving them with no extra attention to think about anything that is not relevant to the task in question. In this state, attention is focused so inwardly that it leaves little to no room for self-referential processing, making any distractions or ruminations about the external world seem momentarily irrelevant. When a person enters the flow state, it is known to many as “being in the zone”, wherein one becomes so absorbed in a task that it feels almost impossible for the brain to be distracted. It is believed that our self-consciousness disappears and our sense of time can get distorted during flow state 一 time can pass by unwittingly.

The term “flow” was first introduced in the 1970s by Dr. Mihaly Csikszentmihalyi, a Hungarian psychologist who devoted much of his life to studying happiness. After the devastation of World War II, he had become very interested in learning more about what brought people joy 一 in particular, what allowed them to feel enough happiness to make the problems of the “outside world” affect them less, and what gave their life meaning. He observed that some people, mostly artists, were so happily immersed in their activity while they were creating that they would lose track of time and even ignore their needs for food, water, and sleep. This sparked his interest in exploring the flow state and these activities, which he called “optimal experiences.” Dr. Csikszentmihalyi recognized that scientists, athletes, and authors also share this unique experience, and based on his findings, he postulated that when people engage in optimal experiences, they can enter the flow state and achieve greater happiness.

In psychology, one of the most widely-accepted theories for understanding flow is the Three-Channel Flow Model, which was initially proposed by Dr. Csikszentmihalyi in his book Flow: The Psychology of Optimal Experience.

The model suggests that if a task is too easy, people can feel unchallenged, and this can lead to boredom. While increasing the level of difficulty might help to reduce boredom, if the task becomes too hard to handle, an individual can feel stressed and anxious. But when there is a balance between these two variables, in which one's skills match the level of difficulty, one can enter the flow state ー the channel between anxiety and boredom ー and feel their best, as well as perform their best. 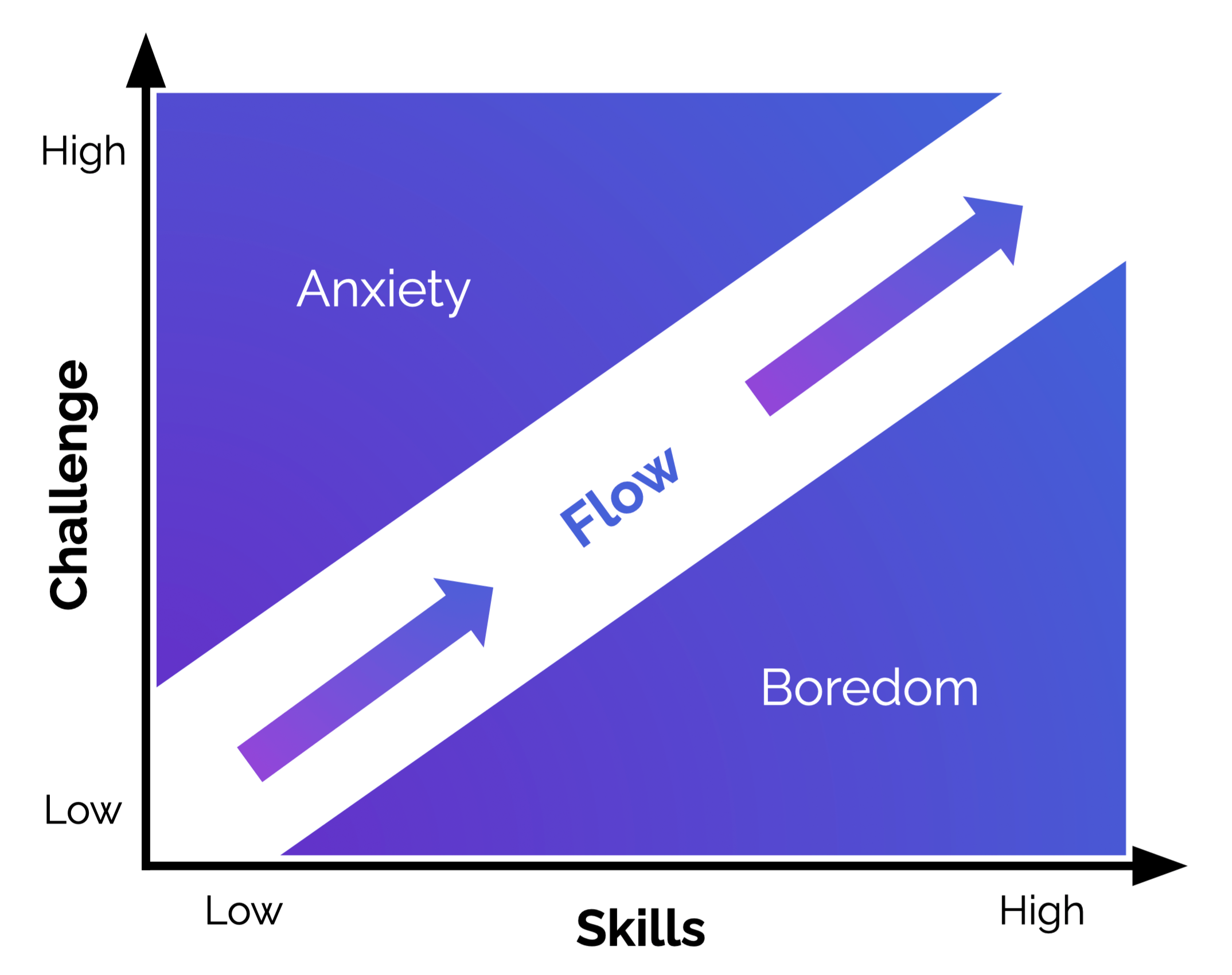 What Are the Benefits of Flow?

A lack of flow can cause psychic entropy ー which is known as the death of self, expression, and creation. When people have no demands on their attention, their mind can experience chaos and this can, in turn, make them depressed. According to the theory, having nothing to do makes you feel unchallenged, and eventually, this can cause negative emotions such as boredom and apathy. To put it generally, being in this state of psychic entropy for too long can harm our mental health.

It is important to cultivate flow for a more fulfilling and enjoyable life. If you’re someone who feels unchallenged most of the time, or if you’re often unmotivated, here’s some good news: flow can be added into our lives, giving us its health benefits and helping us reduce psychic entropy. Studies have found that flow is associated with better emotional regulation, more attentional control, greater happiness, higher life satisfaction, and reduced anxiety. It is believed that these positive effects are caused by the increased levels of dopamine, anandamide, norepinephrine, serotonin, and endorphins ー hormones which are associated with happiness ー that influence the mind. Being in the flow state can also improve creativity, which has numerous benefits, from improving cognitive functioning such as problem-solving skills, to boosting productivity at work.

How To Enter Flow State

There are numerous ways to cultivate flow, many of which are based on its characteristics. Below are some tips that can help you reach and maintain an immersive flow state.

To enter the flow state, one has to be engaged in a task that is "intrinsically rewarding" ー meaning that one is motivated to do it without being asked to. It might be a hobby you enjoy, or even a job that you love. If you're not sure what interests you, give yourself the time and freedom to try out different things and explore what you are genuinely passionate about.

Knowing your progress is an important way to maintain flow, since it offers you a clearer picture of what you have accomplished. Setting goals can also give you direction, helping you to move forward with a task as well as gaining a sense of achievement at the same time. Activities with a clear purpose ー such as completing a painting, finishing writing a story, catching a wave, or winning a football match ー are more likely to cultivate flow.

Seeking an optimal balance between challenge and skills is essential for cultivating flow. Consider finding something that is not too easy nor difficult ー and as a result, can help you to enter the flow state. You may start by first noticing your strengths. Ask yourself, what are you good at? What makes you feel successful and accomplished when you do it? Is there something that you have enjoyed doing which you could take to the next level? Then explore tasks that match those skills.

To be in the zone, one has to stay focused on the task at hand. Avoid multitasking, and prevent yourself from getting distracted by your phone by turning off your notifications or placing it in “Do Not Disturb” mode if that’s available. Only concentrating on one task at a time can allow you to get into the zone more easily. You can also do the task in an organized or specific workplace ー such as painting in an art studio ー since a distraction-free environment can boost your productivity.

In his book, Dr. Csikszentmihalyi mentions that “in flow, there is no room for self-scrutiny.” It is normal to feel that you may not be great at something at times. But if you want to enter the flow state, it’s important to let go of your inner critic ー it’s constantly holding you back! Stop believing that your writing is terrible. Stop being skeptical about your choices of color. Stop thinking that you aren’t fit or strong enough to make it over the next hurdle. Stop questioning your abilities. It may be easier said than done, but constantly reminding yourself to defeat your negative self-talk, with as much conviction as you can muster, can be surprisingly powerful. Let your inner critic leave your mind and believe in yourself, and eventually, you can let the real you shine in the flow.

All of the content on our website is thoroughly researched to ensure that the information shared is evidence-based. For more information, please visit the academic journals and other resources that influenced this article: Flow; Living in Flow: What Is It and How to Enter the Flow State?; “Being in the Zone”: A Systematic Review on the Relationship of Psychological Correlates and the Occurrence of Flow Experiences in Sports’ Performance; Flow Theory - An Overview; Mihaly Csikszentmihalyi Biography; Optimal Experience in Work and Leisure; Csikszentmihalyi’s 3-Channel Flow Model; Flow: The Psychology of Optimal Experience; Optimal Experience: Psychological Studies of Flow in Consciousness; Flow by Mihaly Csikzentmihalyi; Flow Experience, Attentional Control, and Emotion Regulation: Contributions for a Positive Development in Adolescents; What Is a Flow State?; Work-Related Flow Dimensions differentially Predict Anxiety, Life Satisfaction, and Work Longevity among Filipino Counselors; The Neuroscience of Flow; Flow States and Creativity; Flow: The Experience of Intrinsic Motivation; The Flow Engine Framework: A Cognitive Model of Optimal Human Experience; Flow: The Psychology of Happiness (2/52).