Toxic Positivity: Too Much Of A Good Thing?

Positive emotions are well-researched stewards of well-being.  By most accounts, being positive is a good thing and learning how to deal with negativity is an important skill to cultivate. Positivity increases subjective well-being, and the upregulating of positive emotions reduces negative thoughts and affect. It also increases our desire to be kind.  What could be wrong with that? Shouldn’t we strive to get as much positivity into our lives as possible?

Toxic positivity is defined as the act of rejecting or denying stress, negativity, or other negative experiences that exist. You know these people.  Everything is good and fine and magnificent—even when it’s not. When someone skips over essential information about a situation or condition, has unrealistic expectations, has too much positivity given the circumstance, or overestimates what they or you can make happen—this is when it becomes toxic. When you can sense the disconnect between the reality and their enthusiastic response, the lack of genuineness and integration is cause for concern.

Toxic positivity comes from the overuse of two defense mechanisms: denial and minimalization. Denial is when there is a blind spot in someone’s thinking. They either refuse to see, understand, or acknowledge something is wrong with their logic. In concert with denial, minimalization sees, understands, and acknowledges the flaw but keeps it so insignificant that it never rises to the level of concern. “It’s not going to happen, and if it does— it’s no big deal,” could be the tattoo on the mind of a toxic positivist.

This is not to smite the intention of the person offering the saccharine feedback. They may be coming from a very loving and caring place. They may be aiming to comfort you, be helpful, and show they care. Or, if the point in question is about themselves, they may actually believe their own wishful thinking. There is a very good chance they may not be aware of how far off they are from reality, or how they sound—and how dismissive their comments can be when they are directed at you. Most truly believe they are being helpful—yet they are not perceived this way.

At the very core of being around someone whose positivity is off-putting is the feeling that we cannot be ourselves. Their artificiality generates a feeling of having to be inauthentic: when we are unable to be genuine because we fear we will not be accepted or challenged, we’ll shut down—or get angry. Suppressing these difficult, negative feelings can make us guilty for even having them. When you are vulnerable yet unable to be honest about what you feel, it signals mistrust—and then we respond with fight or flight.

When difficult feelings bubble up because of circumstances – like losing a job, a lover, health, or an opportunity – someone saying you shouldn’t feel bad, look on the bright side, or anything that downplays the true feelings you have will not be helpful. But more than this, it will often leave you feeling unaccepted and blameworthy for the negativity.

Negative emotions are important for getting needs met because they provide motivation for change. To not appreciate them in ourselves, or not have them acknowledged by others, keeps us from fully functioning. As a famous quote from Carl Jung informs us, being whole may have a greater value than feeling good.

One of the goals of Social Network Services (SNS) such as Facebook is to connect people with others sharing similar issues. In a 2022 study on toxic positivity on Facebook, researchers looked at virtual communities devoted to invisible chronic conditions such as endometriosis (a painful condition of abnormal tissue growth in other parts of the pelvis beyond the uterus such as in the ovaries or fallopian tubes). They found that toxic or forced positivity is often based on illogical reasoning and can carry a paternalistic or dismissive tone. People tended to use cliches to respond to someone’s pain, with comments such as, “It’ll get better,” or “Look on the bright side.” This does more to distance people than it does to help. The reason? Other researchers found that through anonymity, SNS creates nearly perfect conditions for toxic positivity to flourish—which destroys feelings of genuine compassion.

When encouraging words are offered in a difficult situation forcing a positive reflection, the effort made is to show empathy.  Yet the forceful effort to make someone have a positive mindset repudiates negative thinking, and the resulting impact is shame. In another study over 90% of the respondents had experiences of toxic positivity and nearly the same percentage chose the phrase, “Be patient, there are still many who are worse than you” as the best example of it.  Over half believed positivity becomes toxic when positive thinking is used incorrectly—and sadness, disappointment, anger, annoyance, and feeling uncomfortable were common responses to this attitude.

In the same study, about 40% were of the opinion that those who do it do not realize it is toxic, and that those guilty of toxic positivity weren’t appropriately encouraging nor validating of feelings. The respondents said that misguided positivists made their comments toxic through comparisons, a lack of empathy, and judgements. About 25% said this resulted in awkward relationships. The research clearly supports what we sense and feel.

If you are looking to curb your use of overly-positive responses, keep one thing in mind:  Listening deeply to what another person is saying will go a long way toward helping you make the right connection. If they are not putting out anything positive, don’t take on the job of trying to make it so. If you want to understand more about different types of listening, check out our article on how to listen using Active Constructive Responding! The key is to match where the person is at—rather than feel responsible for making it better. The analogy that I use to describe this is if someone comes to you with a tablespoon of salt: don’t give them a six-ounce cup of water to put it in. That’s what toxic positivity does. It is the equivalent of saying we don’t have enough space to accept the negativity you are bringing. Instead, become the size of a lake. In doing so – by expanding our compassion and understanding – the same tablespoon of salt will dissolve as the lake accepts it.

Below is a chart with examples coming from a situation where someone has just had a terrible fight with their partner.

What is important, first and foremost, is to hit the pause button on their advice. If any of the feelings noted in the above chart are being activated and you are feeling their feedback is disconnected from your truth, find a way to pause, even if you have to interrupt, and then try to say what you would like from them instead.

Now suppose we are using the same example as above—only it is you who have had a terrible fight with your partner, and you are now receiving toxic messages. Here are four ways to press pause and redirect to what you would like from them. 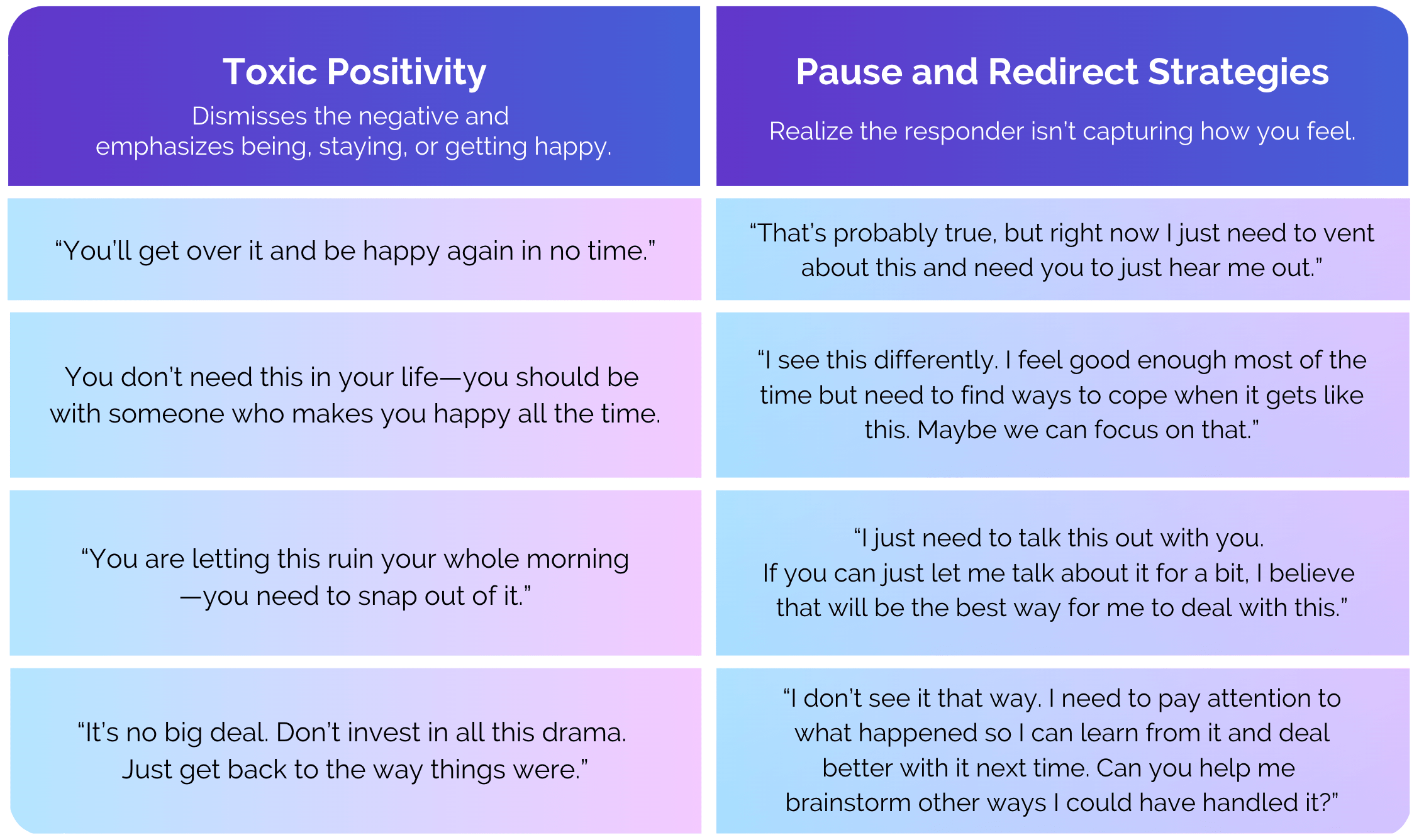 Over time these first two strategies of pause and redirect should keep you from getting absorbed into the pitfalls of toxic positivity. But if you have repeated conversations with someone who doesn’t evolve their responses for you—you may want to bring the pattern to their attention.

In this instance, you would ask if they would be willing to accept some feedback.  Asking something like: “Can I share an observation with you?” can be a good beginning.  If the person says yes, then it gives you permission to offer the observation. For example, the feedback might be something like: “I am so thankful that you are here for me, and I notice when I am feeling down or bad about something that you try to put a positive spin on it.”  Would you agree with that?”

Whatever their answer, you’re now in a position of giving them information about how you experience them in conversations, and what it is you would like from them—or what you need. If they are willing, you’ll now have someone who can be there for you in a way that is really helpful. If they say they can’t, don’t want to, or are too upset by the request, then you may want to find someone less toxic, and more aligned with meeting your needs. 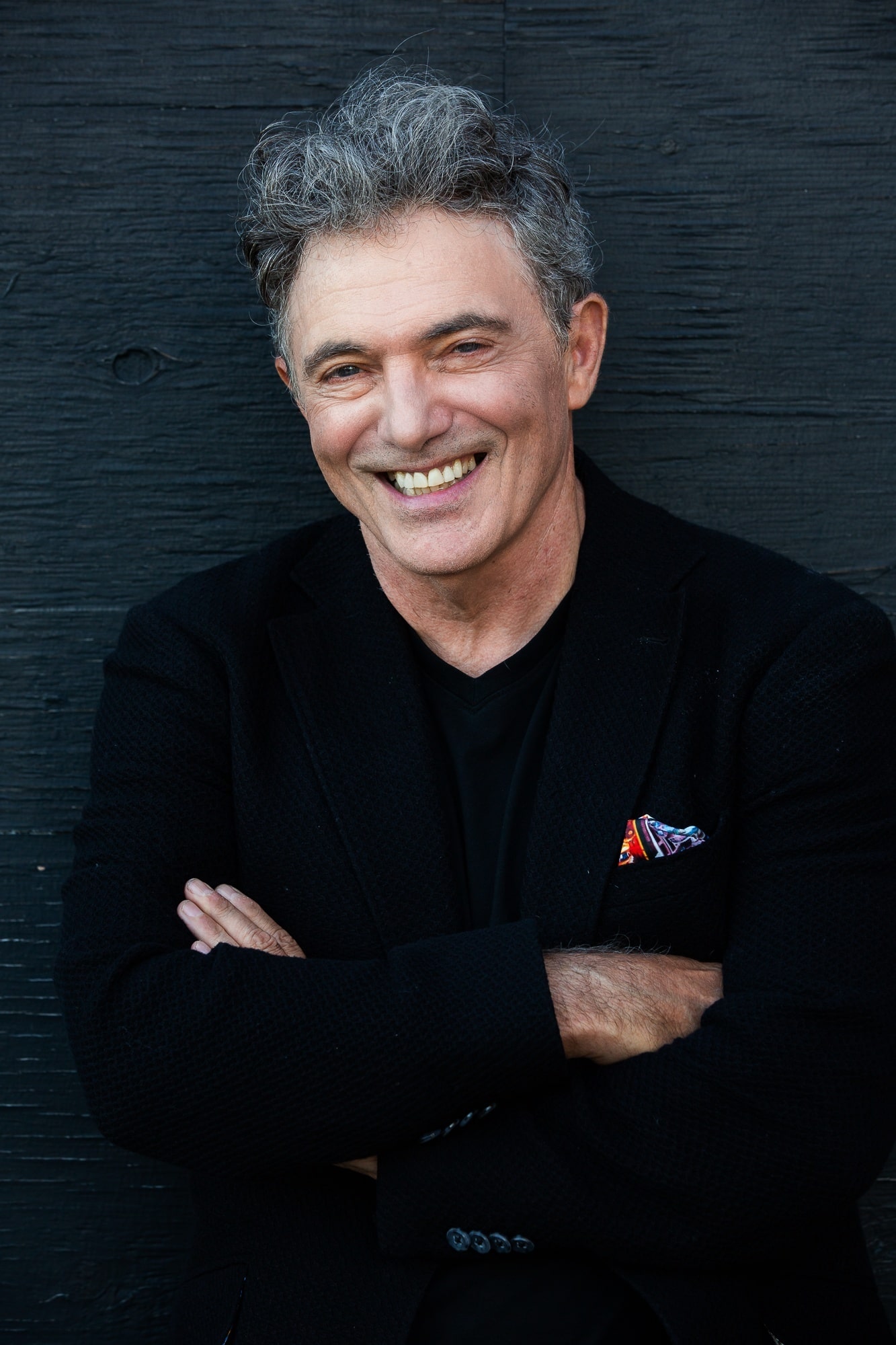 Written by Dr. Dan Tomasulo, an American psychologist, writer, and professor, and the Academic Director and core faculty at the Spirituality Mind Body Institute, Teachers College, Columbia University, New York. He is the author of Learned Hopefulness: The Power of Positivity to Overcome Depression. Dan’s passion is positive psychology and the science of happiness, helping people focus on their strengths and cultivating their best selves so they can lead meaningful and fulfilling lives.

All of the content on our website is thoroughly researched to ensure that the information shared is evidence-based. For more information, please visit the academic journals that influenced this article: The Opposite Of Toxic Positivity; Reflections On Positive Emotions And Upward Spirals; Regulating Positive Emotions: Implications For Promoting Well-Being In Individuals With Depression; Positive Interventions: An Emotion Regulation Perspective.; Mindfulness: Top–Down Or Bottom–Up Emotion Regulation Strategy?; Mindfulness Meditation Activates Altruism;  It’s Okay To Be Okay Too. Why Calling Out Teachers’“Toxic Positivity” May Backfire; The Relationship Between Facebook Use And Well-Being Depends On Communication Type And Tie Strength; 'you Got This!': A Critical Discourse Analysis Of Toxic Positivity As A Discursive Construct On Facebook; Toxic Positivity: The Dark Side Of Positive Vibes; Analysis Of The Generation Z's Viewpoint From The Faith-Based Educational Institutions On The Toxic Positivity Phenomena: How And Why?; How To Respond To Toxic Positivity.