The 3 Components of Social Awkwardness - Do You Have Any?

Have you ever been in a situation where you just wanted to dig a hole and hide in it? These awkward moments are very common ー for example, when you say “Hi” to someone only to realize they were actually waving at the person behind you, when you text a message into a group chat and none of your friends reply, or when you say something you didn’t think twice about that accidentally earns a grimace from others. While these moments can make many of us feel stressed ー or perhaps even develop negative self-talk, in which we judge our own behavior in a negative way ー it is important to understand that awkwardness is actually a universal emotion. No matter how sociable one is, one can still experience these uncomfortable and embarrassing feelings, and even the most confident people feel awkward sometimes.

Social awkwardness is not a mental health issue. In fact, it’s a social tool that can help promote social harmony. By realizing the importance of social cues in our everyday social interactions, and using them to improve essential communication skills, we can learn to be better at managing social awkwardness while building closer relationships with others. Read on to learn more about the psychology behind social awkwardness, three of its components, and how to be more comfortable in everyday social situations by becoming more “socially fluent.”

What Does It Mean To Be Socially Awkward?

Social awkwardness happens when one's action or behavior has deviated from the norm of social expectations ー a set of invisible social guidelines or rules ー that operate in a culture. These can vary based on different cultural origins. For instance, while making a V-shaped gesture with your fingers is commonly interpreted positively by Americans to mean "victory" or "peace", using the same gesture in South Africa, where that very same gesture could be considered offensive or rude, may land you in a pretty awkward situation (if not serious trouble). Broadly speaking, social awkwardness is when an individual behaves in a way that misses the mark on the socially and culturally acceptable cues.

The concept of social awkwardness was discussed by Dr. Ty Tashiro ー a psychologist, author, and a social scientist ー in 2017 in his book AWKWARD: The Science of Why We're Socially Awkward and Why That's Awesome. In it, Dr. Tashiro explained that awkward moments typically occur when an action has fallen out of the "socially acceptable bounds”; which, in turn, results in a violation of those social expectations. He suggested that awkward individuals see the world differently than those who are non-awkward: they maintain a "spotlighted view", through which they tend to focus their energy intensely on one specific area. This narrow focus can create challenges for them to adapt to the social world. Socially awkward people can have a lower awareness of social norms, making them less likely to realize the way they violate those unspoken rules.

The 3 Components of Social Awkwardness

Being the protagonist of a socially awkward situation is probably one of the most universal experiences that we have all encountered at some point in our lives. Dr. Tashiro suggests that socially awkward individuals tend to share three common characteristics: 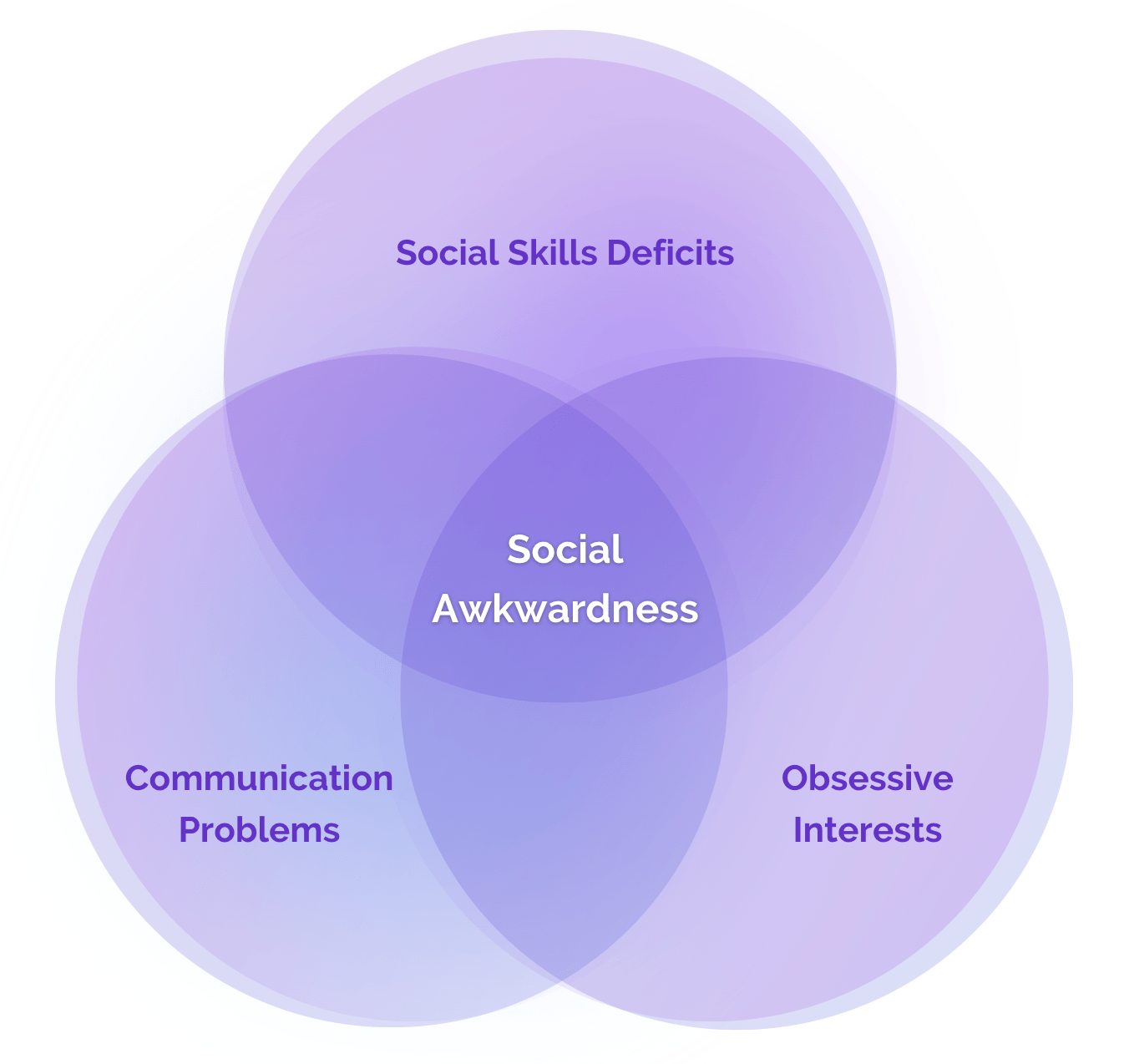 What are the Functions of Social Awkwardness?

According to Dr. Tashiro, awkward moments can help us correct deviated behaviors in our everyday social interactions. It is believed that these moments are an alert to remind a socially awkward person that they have stepped outside of the socially acceptable bounds ー for instance, when one experiences social awkwardness through an uncomfortable handshake, or after accidentally asking an inappropriate question. As a famous quote by the ancient Greek philosopher Aristotle goes: “Humans are social animals” 一 which is tied to the idea that we all have the need to belong. In this way, awkwardness may serve as a social tool for encouraging us to conform to existing norms, pushing us to adhere to those expectations, fulfilling our need to belong, and helping people achieve greater social harmony.

Awkward moments also elicit a range of negative emotions, such as:

While social awkwardness may seem undesirable to many, Dr. Tashiro pointed out that one covetable trait awkward people tend to possess is their tendency to be very passionate about a very specific focus. This can act as a key ingredient in leading a person to overcome difficult challenges. Due to this energy, awkward people tend to be more likely to persist through obstacles that stand in the way of their goals, easily reaching a flow state, and viewing difficult situations as a way to learn. In this way, social awkwardness can be a superpower for people looking to become an expert in a particular field.

How Can You Manage Social Awkwardness?

Social awkwardness is a trait that can offer a person an atypical perspective for viewing the social world. If you’re someone who tends to feel socially awkward, remember, there’s nothing wrong with being awkward! Just like other skills, techniques for overcoming awkwardness ー such as utilizing one’s social skills and body language, and honing one’s ability to recognize social cues ー can be learned. Below are some ways to feel more comfortable in social settings, and decrease social awkwardness:

Be Aware of Social Cues

Social cues can be hard to notice since our interactions tend to be highly spontaneous and unpredictable. But once you’ve started paying attention to them, the process can become automatic, and you’ll be able to communicate more effectively and effortlessly. When it comes to non-verbal behavior, you could ask yourself, “What tone of voice should I use?”, “Should I maintain eye contact with the other person?”, and “Is laughing appropriate in this situation?” You can also consider your facial expressions by asking yourself, “Does my expression line up with the emotions I’m feeling, and is it appropriate for my face to reflect that?” One single conversation can contain a wide variety of social cues from body language to tone of voice, and everyone has a different style of communication. Not only can using socially acceptable cues help you engage your conversation partner more easily, it can also help you be more charismatic.

Imagine if someone you’re talking to can’t stop talking about the ultra-rare villager they’ve just invited to their Animal Crossing island, or the best strategies to beat the biggest boss in the latest Pokémon game ー and as someone who doesn’t play either of these video games, you have absolutely no idea what they’re referring to. This situation could play out the other way as well: perhaps you’re at a party and you can’t resist telling every new person you meet every last detail about the training and prep you’re doing for your next athletic endeavor ーeven if none of them are passionate about sports or fitness. On the one hand, while these could both be situations through which both parties can learn about something new and potentially interesting or educational, they could also turn into a one-sided conversation with a polite yet bored audience. Talking about something that your conversational partner(s) isn’t interested in for far too long can lead to an awkward or uncomfortable moment, since only one person is engaged. To avoid this, always provide a chance for someone else to speak, and try to figure out what interests them too. Generally speaking, people love talking about themselves, so if you’re not sure where to begin, asking them some non-invasive questions and encouraging them to share their thoughts is a great way to keep a conversation flowing.

All of the content on our website is thoroughly researched to ensure that the information shared is evidence-based. For more information, please visit the academic journals and other resources that influenced this article: Social Norms - Stanford Encyclopedia of Philosophy; V-Sign - Oxford Reference; 5 Everyday Hand Gestures That Can Get You in Serious Trouble Outside the US; About Ty Tashiro; Awkward: The Science of Why We're Socially Awkward and Why That's Awesome; Spontaneous Facial Expression in Unscripted Social Interactions Can Be Measured Automatically; The Social Perceptions of the Highly Intelligent; What Is Social Well-Being? Definition, Types, and How to Achieve It; Aristotle - Greek Philosopher; Why Being Awkward Makes You More Likely to Succeed; Types of Nonverbal Communication; Facial Expressions, Emotions, and Sign Languages.