Personality is the individual differences in thinking, feeling, and behaving. It influences how you interpret an event, why you act in certain ways, and what makes you you. Knowing the ins and outs of your personality can not only help you to choose a career field that matches your natural strengths, it can also offer you various benefits from helping you to strengthen your existing relationships to enabling you to understand how you approach difficulties, and providing a way for you to learn more about yourself.

Although it may sound like something we should intuitively know, figuring out the finer details of our personality isn’t always easy, and personality tests are helpful tools for offering more clarity. Generally speaking, these are questionnaires and surveys designed by psychologists to measure different facets of one’s personality. With their versatile applications, these tests are used for multiple purposes. A psychologist may use them to gain insights when making a clinical diagnosis, for instance. Recruiters can also use them to predict how potential employees may behave in the company, while individuals can use them to help choose paths in life that are more suitable for living a more happy and fulfilled future.

Developed based on The Big Five Personality Theory (also known as the Five-Factor Model or the OCEAN Model) this test can help discover where your own personality falls on a scale of the five personality types. The name was first coined by Dr. Lew Goldberg, and later developed by numerous psychologists during the 1980s. The theory postulates that there are five major personality traits – openness to experience, conscientiousness, extraversion, agreeableness, and neuroticism – which we universally share. Instead of rigidly categorizing an individual into a fixed category, this personality test and the theory behind it suggests that all five traits exist on a continuum. Rather than telling you that you are an extrovert, for instance, this test takes a less rigid approach. It explains if you have a higher or lower score on extraversion, and how if this is on the higher side, this makes you more likely to be an extrovert.

The OCEAN acronym comes from the first letter of each trait. Below are some of the personality characteristics it describes, and insights into how people with different scores tend to behave:

This personality test was first designed by Katherine Cook Briggs and later developed by her daughter, Isabel Briggs Myers. Eventually published in 1962, MBTI categorizes you into one of the 16 personality types by assessing your personality on four dichotomies: which one of the two groups, within the four aspects of personality, you belong to. Since Briggs and Myers were heavily influenced by Dr. Carl Jung, a Swiss psychologist whose approach explores unconsciousness, the MBTI suggests that personality can influence our perception of the world, be it consciously or unconsciously.

Here are the four dichotomies and their characteristics:

Your personality type, according to this test, will be a four-letter acronym that combines how you scored on the four dichotomies described above – for instance, ESTJ, INFP, or ISTP. There are 16 personality types in total. Each has its own talents and skills. There are also roles assigned to each of the types, each of which capturing its major characteristics: 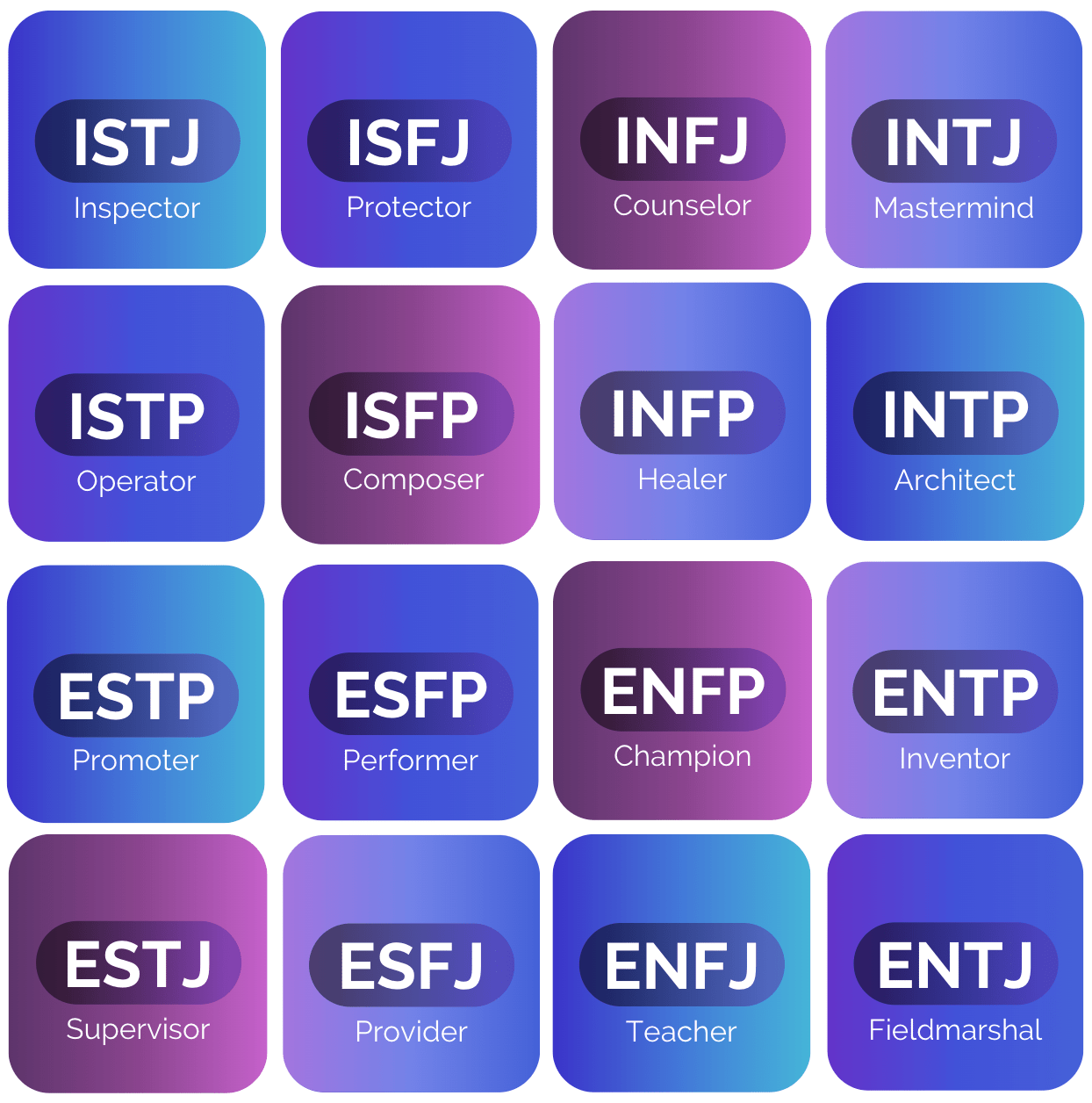 This personality test was developed by Dr. Hans Eysenck – a personality psychologist – from his own theory, The Eysenck’s Theory of Personality, in 1967. After his initial disagreement with the MBTI’s 16 personality types, he wanted to reduce the number of defined personalities, so he categorized them in his own way: he grouped them into dimensions. In his theory, he also puts forth the idea that our personalities are heavily influenced by our genetic and biological factors. So rather than focusing on how the environment reconstructs personality, his theory emphasizes the role of genes.

There are two dimensions of personality in this model: the Extraversion/Introversion dimension and the Neuroticism/Stability dimension. They are two independent continuums, and basically, they assess how extroverted and neurotic you are. Your final scores of the two dimensions will make you fall somewhere on the graph below, which in turn categorizes you in one of the four personality types: sanguine (stable extrovert); choleric (neurotic extrovert); phlegmatic (stable introvert); and melancholic (neurotic introvert).

What Is Your Personality?

There is no good or bad personality. Although certain traits may be seemingly more preferable in some societies, we're all unique in our own way, and each characteristic has its own strengths. Introversion makes for empathetic listeners and disagreeableness makes for curious scientists, while neuroticism makes for cautious individuals who always think and act carefully. The results you get from these personality tests don't necessarily indicate anything that makes you more valued than the others, nor do they carry any meaning that makes you less favorable. Rather, these tests are simply tools that can help you understand more about yourself objectively.

Do you recognize yourself in some of these traits? What personality traits do you think you have? When you’re taking these tests, answer the questions as honestly as you can for the best and most accurate results. By learning more about your unique personality from these tests, you can use these insights to help become the best version of yourself.